Welcome to our Barcelona Blog

Our blog offers useful information covering up-and-coming events, fun for the family, last minute offers and general tips and advice about Barcelona and the areas surrounding our apartments and accommodation. We hope that you enjoy it !

Barcelona is one of the most attractive, colourful and multicultural cities in the world, every year hosting a wide range of events, festivals, exhibitions and conferences, covering the needs of the business professional and the professional tourist.
Read More

Like many great cities, Barcelona has a strong sense of community and family culture. It´s not unusual to stumble across and be welcomed into a lively and vibrant street party during your stay. The family friendliness also extends into the local bars and restaurants where children are made to feel welcome.
Read More

We have a wide range of fully-equipped apartments in the most desirable locations in Barcelona, all at the most attractive prices. We constantly launch special deals and last-minute offers in order for you to get our best prices. Be a regular visitor to rentBCN.com and keep an eye on our latest discounts to bag yourself a true bargain break in the sun.
Read More

One of the best ways to experience Barcelona is to wonder around and get lost in the tight, charismatic and lively back streets of Gràcia, El Born, El Gótico, La Barceloneta and El Raval. Taking in the smells and tasting the local dishes (tapas), shopping in the stylish and individual shops and boutiques. Always a new and surprising discovery waiting around every corner…
Read More

Posted on July 7, 2015 by rentBCN in Uncategorized | Leave a comment

Here is a truly special, elegant and intimate experience for those 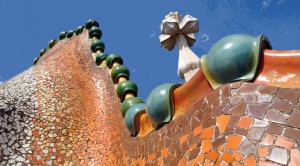 Looking for a unique night time mix of art, live music, fine food and drink. This summer Casa Battlò hosts, for the first time, its Magic Nights on the  Dragon Roof Terrace, providing a fresh and distinguished evening set within this magical Gaudi masterpiece. Access to the rooftop is from 9:00pm each Wednesday to Saturday, and can be combined with a visit around the house prior to the entertainment, making this a visit to remember.

complete that memory by booking an elegant apartment with RentBCN 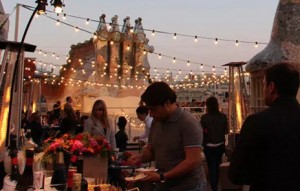 The combined visit is priced at just 36€ and is from 8pm onwards, giving you an hour to explore, with a video guide of the house itself also available, then at 9pm the roof terrace is opened.

You can take just the 29€ option which allows you access to the roof terrace from 9pm for the evening concert. Both options include a drink, and there is further optional food and drinks available.

Posted on June 2, 2015 by rentBCN in Events in Barcelona | Leave a comment

Summer is coming and so is Sonar!!! Here at rentBCN we are really excited about the return of one of THE music and dance festivals of the year!! The pioneering  music and audiovisual experience makes its annual returns  to Barcelona bringing together established International  artists with new emerging talent, showcasing their creative  ideas and the latest technical innovations in electronic music  and visuals. 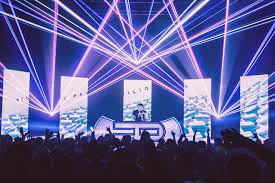 Sonar draws in 10s of thousands of party-goers,  all eager to experience the latest sounds and visual trickery, and dance into the small hours of the night…..and day 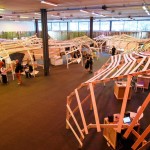 This year sees the showcasing of the new Sonar +D area, a forum bringing together technicians, artists, businesses and researchers debating all aspects of electronic music and audio visuals production. Discover the latest initiatives and tools that will shape future creative experiences and find great advice and guidance in all areas of creation and production.

If you just want to party hard to the latest sounds and visuals or want to learn more about the world’s most technically advanced audio visual entertainment then you need to be at Sonar 2015 this year. We will be,

Posted on April 22, 2015 by rentBCN in Family friendly, Wandering arround | Leave a comment

We wanted to dedicate a complete “walkaround” post based on the works of Antoni Gaudi, but not only are

there so many to cover in one day’s walk but they all deserve more than a mere walk-by. Most require a couple of hours to visit and one or two are located a fair walk from the city centre. So, here are a few walks which take in the Gaudi attractions and incorporate other interesting parts of the city….

Perhaps the most famous and controversial of the Gaudi landmarks, it remains a work-in-progress 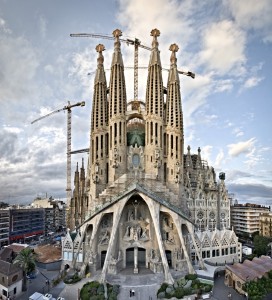 since 1882 and was estimated to be only 15 – 25% completed when Gaudi died in 1926. This Roman Catholic basilica began life as Antoni Gaudi’s modernisme interpretation of a gothic church. It was consecrated for religious services in 2010 by Pope Benedict XVI. Due for completion in 2026, it will have a total of 18 spires and reflect as much of Gaudi’s original plans as has been possible to piece together. Want to read more?…. http://en.wikipedia.org/wiki/Sagrada_Fam%C3%ADlia

If you want to enter Sagrada we would advise booking in advance online as the queue can take hours, timed entry tickets are available which allow you to bypass the long queue

Start at Metro Verdaguer and head north-east along Carrer de Provenca.….Sagrada Familia is no more than 5 blocks away. 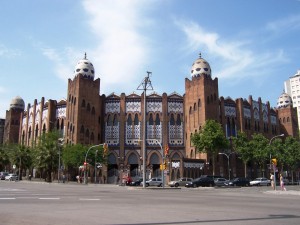 Once you’ve taken in the magnificence of Sagrada make your way to the north-east face (the Nativity – the more worn looking side), this should be Carrer Marina. Head south-east along Marina, after 4 or 5 blocks you will arrive at the Arenas Monumental. This is the site of one of Barcelona’s bullfighting rings, thankfully now a museum and exhibition centre.

Continue south-east along Carrer Marina (the more eagle-eyed might spot the Torre Agbar off to the left – although better viewed at night) and after Carrer de Casp head south along Carrer Ribes, which is more of a cycle path than a street or road.

This will take you past Estacio del Nord bus station, behind which sits a 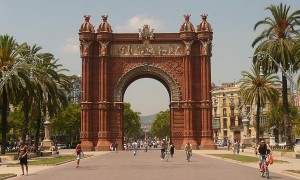 little park and green space. Continuing along Carrer Ribes brings you to Arc del Triomf Metro station and monument. Designed by Josep Vilaseca, it was created as the entrance to the first Universal Exposition of 1888. 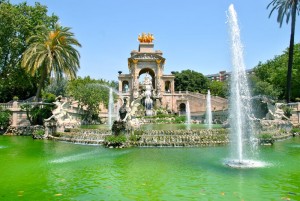 Pass through the Arc and head south-east along Paseo de Lluís Companys and into Parc de la Ciutadella….oh wow!! what a place! Want to see some life? Want to see how a park should be used? Here you’ll find so much….museums, the city zoo, a tropical plant house, the Catalan parliament building, monuments, sculptures, a church, children’s playareas, a boating lake, a stone mammoth and the stunning Gaudi cascade fountain topped with the golden horse drawn chariot of Aurora and featuring the birth of Venus. It’s our favourite spot in the city to relax, meet family and friends, picnic and pass a beautiful sunny day, come join us!!

Had enough?!? or do you want some more?…..well, “you do have to make your way back to your RentBCN 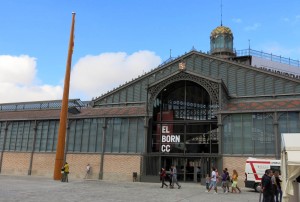 apartment“.….exit the park by the south corner, close to the zoo entrance. Head south-west along Marques de l’Argentera with Montjuic mountain in view, then take the first right into Carrer del Comerç. Here you will come across the Mercat del Born,  originally built in the 1870s. It fell into disuse in the 1970s and 80s. In 2002 work began to install a library within the building only for workers to discover archaeological remains of medieval times dating back to the 14th century. Since then the Catalan government have declared the site as a cultural asset of national interest and it is now fully restored as a cultural centre where the exposed medieval ruins can be experienced. A must see!

Exit Mercat del Born back into Carrer Comerç heading north-west, this will bring you to the Chocolate museum, you might be tempted to treat yourself here after such a long walk

Continuing along Carrer de Comerç brings you back to Passeig de Lluis Companys and the Arc de Triomf. Passing under the Arc again, head north-west along Passeig de Sant Joan. After 4 blocks pass through Plaça de Tetuan and then after another 6 blocks you arrive where you began, at Metro Verdaguer.

Exhausted?! You should be! You are now back in the Gràcia district and close to your apartment. We suggest you freshen-up, eat well and take fully advantage of your relaxing and comfortable RentBCN apartment.

Posted on April 17, 2015 by rentBCN in Events in Barcelona | Leave a comment 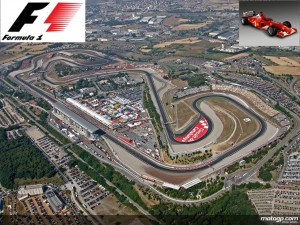 The 5th round of the most exciting, exhilarating and biggest sports of all     comes to Cataluña, the Formula 1 Grand Prix. The world’s most technical   and fastest sport makes its annual visit to Spain where Lewis Hamilton,Nico Rosberg, Fernando Alonso and company will fight it out for pole position and ultimate victory. Our RentBCN staff will be eagerly following   the whole event, through practice, qualifications then finally the race.

Get that feeling of having taken the Chequered Flag in 1st place, by booking with RentBCN

Posted on April 17, 2015 by rentBCN in Events in Barcelona | Leave a comment 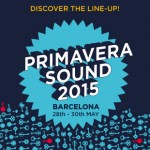 One of the year’s biggest festivals is coming up soon in Barcelona, Spring is well underway which means it’s time for Primavera Sound 2015. Check out the line-up of artists for this year’s event. For more detailed information go to the www.primaverasound.es website.

When you’ve booked your Primavera Sound ticket why not book the ideal apartment for your stay, with RentBCN

Posted on March 16, 2015 by rentBCN in Events in Barcelona | Leave a comment 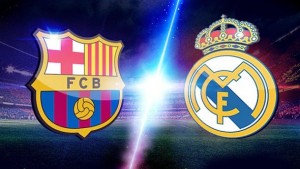 Come and see the greatest league game in the whole world. These are THE most sought after tickets of any footballing event as, arguably the two greatest teams in club football do battle in a match which will go a long way in deciding who wins the La Liga title.

Take a rentBCN apartment and come join in the Barca party….or commiserations :\

Posted on March 14, 2015 by rentBCN in Events in Barcelona | Leave a comment 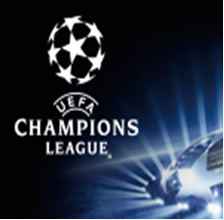 Hi football fans, would you believe that here at rentBCN we are actually huge fans of Liverpool FC. So being such passionate fans as yourselves we know you’re going to want to celebrate in style (or cry in comfort) after the up-coming clash of these two Champions League Titans.

Posted on March 12, 2015 by rentBCN in Events in Barcelona | Leave a comment

This is the 37th running of one of the most popular marathons in Europe. It takes the runners through Barcelona’s most beautiful and scenic locations. It’s watched by thousands of supporters and well-wishers lining the streets alongside the water-stations, massage-points, showers, food-points and musical entertainment.

Prepare for the perfect marathon run at a rentBCN apartment

Posted on March 12, 2015 by rentBCN in Events in Barcelona | Leave a comment

This is a rapidly developing and very popular event in Barcelona as the science of the micro-brewery sweeps across Europe. The main event is a long bar of over 50 taps where you can sample over 300 artisan beers and brews from across the country. 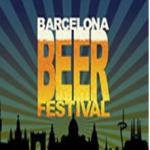 Again, the festival is hosted in the Maritime Museum located at the port end of Las Ramblas, in the heart of Barcelona.

Posted on March 12, 2015 by rentBCN in Family friendly | Leave a comment

A great day out for all the family!

landmarks and Gaudi attractions.This a great place to take the kids whilst visiting Barcelona. There is also an Enchanted Wood aerial forest park with activities to suit all ages including a thrilling zip-line.

Make a rentBCN apartment your perfect base in Catalunya(check out our prices for Easter 2015: 2 adults + 2 children)

We recommend travelling by train, departing from Placa  España with a combined price  (train, bus and entrance fee) of:  16€ / adult, 12€ / child